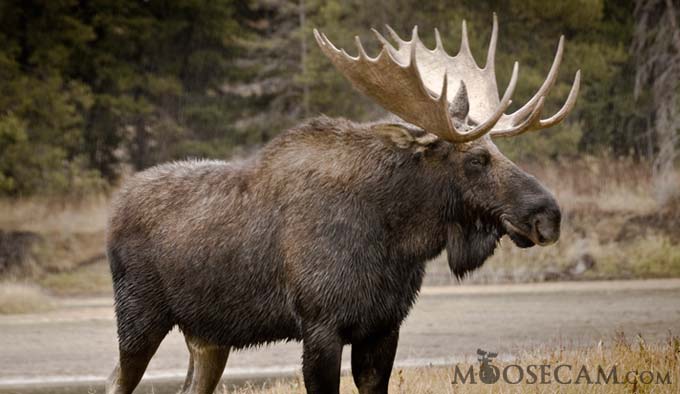 What the bugs say.

Moose numbers have declined significantly in recent years and while this has been attributed to many things, loss of habitat is probably the most vital. In his talk Dr. Roy Rea dispelled some myths surrounding moose and forestry, such as the idea moose like clear cuts, and stressed the importance of following the chief forester’s guidelines. Overall moose need heterogenous habitat. They need mixed age and mixed species stands of trees in order to find adequate food and shelter, as do many forest dwelling species. Despite many calls, including by the chief forester, to leave as much non-economically useful material as possible, many logging initiatives simply continue with business as usual.
What stuck out to me about the refusal to leave a heterogenous landscape, either by retention or planting, is that its bad for moose, but really good for forest pests. To a forest pest like a bark beetle an even aged single species stand is essentially a buffet. Most regulations for avoiding pest and disease outbreaks in managed forests stress the importance of heterogenous stands and considering the amount of loss an outbreak can cause its bizarre that these regulations aren’t being followed. Not only does poor forest management hurt moose, it also hurts forestry.
I liked Dr. Rea’s presentation style. He avoided jargon and clearly kept who was in the audience in mind. I found the presentation easy to follow despite the volume of information and he did a good job backing up his points. I appreciated his use of diagrams to answer questions at the end, it really helped get the point across.
While this presentation doesn’t really apply to my current research, it applies to my undergrad project. I worked on purple martins for a couple of years. They historically nested in snags, but the routine removal of snags left them with no nesting habitat. Eventually a nest box program had to be established to keep the martins from being extirpated from Vancouver Island. Like moose, leaving as much “useless” timber as possible is vital to the long-term survival of purple martins

This work by Alexandra Lamberton is licensed under a Creative Commons CC-BY Attribution 4.0 International License.

The secret life of lichens