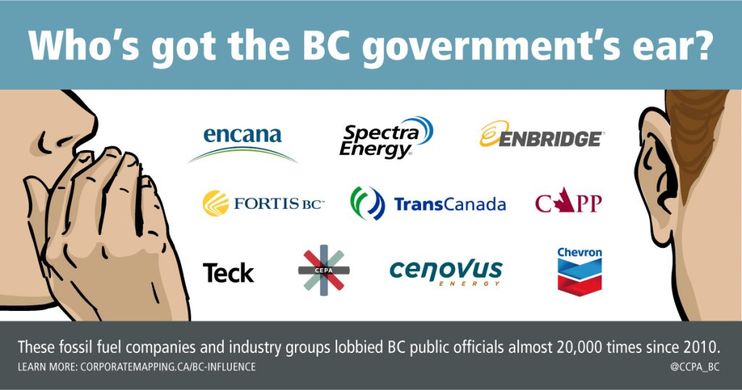 Dr. Fiona McPhail, professor of Economics at UNBC, is one of the 24 co-investigators collaborating on the Corporate Mapping Project.  I got the feeling that the overview she provided us with just scratched the surface of what seems to be a massive undertaking, if the number of partners says anything about its complexity: there are 100 people listed on the “Our Team” page of the project’s website, including a steering committee (6), the core team (24), collaborators (20), community advisors (44), and an advisory board (6).  The ultimate goal is to map the corporate power network of the oil, gas and coal industries of BC, Alberta and Saskatchewan, and to make the information available to the public.  I did not realize that this was such a complicated task, indicative of an industry shrouded in secrecy.

Dr. McPhail described the four main themes of the project, namely: the social organisation of corporate power; the impact of corporate power on society; fossil fuel capitalism at ground (community) level; and democratic discussion and just transition.  Zeroing in on the third theme, Dr. McPhail told us about Fossil Fuel Flashpoints: Towards a Typology, with illustrations from northern BC – a chapter that is being written for inclusion in a forthcoming book entitled Regime of Obstruction.  This project looks at controversies at the local level, such as opposition to pipelines.  Northern BC is the focal point because there is less information available about groups opposing fossil fuel development in the north than there is in the south. The case studies that Dr. McPhail mentioned sound quite interesting, including one in which unrelated groups in different geographic locations protested the same issue independently.

Relating this research to my own Master’s research makes me think about the similarities in corporate power structures of oil and gas companies and other giants such as Monsanto.  I’m researching some of the effects of one of Monsanto’s glyphosate-based herbicides, and have learned to check the affiliations of all the writers of any article about glyphosate.  Sadly, one of the reasons why there is so much controversy about this topic is because, even though they are peer reviewed, many research articles on glyphosate are biased toward big business.  I’m sure there is a lot of corporate influence embedded in all aspects of politics, society, and even science.  Maybe I’m naïve for knowing so little about this topic, but I’d rather not think about it to be honest.  I appreciate the passion of others who want to expose corruption for what it is, making it possible for the rest of us to make informed choices.

This work by Nicole is licensed under a Creative Commons CC-BY Attribution 4.0 International License.